Well, here I am, retired from my day job as an elementary school teacher. I guess one of these days I'll get someone to take a picture of me, one I can use for publicity. The reason I never have, aside from the one picture I took while I was bald, is that I was afraid a parent of one of my students would find out, and probably not be okay with their child's teacher writing erotica. I still may wait a bit, but one of these days.

As I mentioned the last time I felt inclined to write, I'm thinking about continuing The King's Trilogy. In fact, I did put a bit of time in on chapter one of the third book The King's Son. Prior to that though I re-read both The King's Tale and The King's Heart, to get myself back into the world of Lysnowydh. I started on the first book in late 2005, and the first edition was published in 2009. The second book, and the 2nd edition of the first book, were published in 2012. Although I knew the outcome of both stories, it was fun reading them again. Reading and criticizing, of course.

I've said before, I was asked to make a pretty major change to the ending of The King's Heart. The "event", taken in modern context, was pretty shocking. In medieval times, and considering King Christopher as a character, it was probably fine the way it was. But, it's in the past, and during this recent re-reading I came to accept the fact that I'd changed it.

The King's Heart received a fair amount of criticism. There were outright, no other way to put it than falsehoods, spread on some message boards. The removal of the "event" left a lot of unconnected scenes that were also criticized as now they were out of context. And, there were people who found it not believable. How could Dafydd, who had proven himself as a fierce warrior, be left as a sniveling coward who wouldn't leave the castle? Here is a small excerpt:

This is just one example of how Dafydd is unwilling to leave the safety of the castle (I'm trying to get away from calling it "the keep"). Obviously he's reluctant to venture to Strasnedh, as that was the site of his torture at the hands of Warin. Later on he shows he's unwilling to even travel about the kingdom, let alone venture all the way to London. Each time Christopher is angered, each time Dafydd is saddened.

When I wrote that, I had no idea how true this would be for Dafydd. I think I questioned myself, would Dafydd really be that cowardly? Of course, I was building to Dafydd fleeing across the kingdom of Lysnowydh, Christopher in pursuit, to prove he wasn't a coward. But, I have a whole different take on it now.

Unfortunately, I've had to see first hand how much chronic illness (or in Dafydd's case, the long period of time where he recovered from Warin's torture) can make a person anxious. Especially anxious about leaving the safety of home. For a year and a half, I didn't travel anywhere. Sure, trips around town weren't that stressful, but get me even a few hours away from home base and I began to fret.

I'm fine now. All major issues have been dealt with for well over a year now. I should be free as a bird. Yet, we are planning a short trip in a few weeks. As part of our retirement gifts our coworkers gave us a gift certificate for our favorite romantic bed & breakfast. It's a fabulous place, and I know we'll have a good time. But, there is a part of me that just doesn't want to go away from the safety of my hometown. Much like Dafydd, needing the safety of home.

So, there you go....what I thought was simply fiction turned out to be truth. 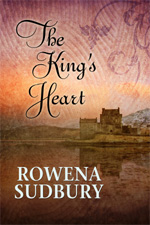